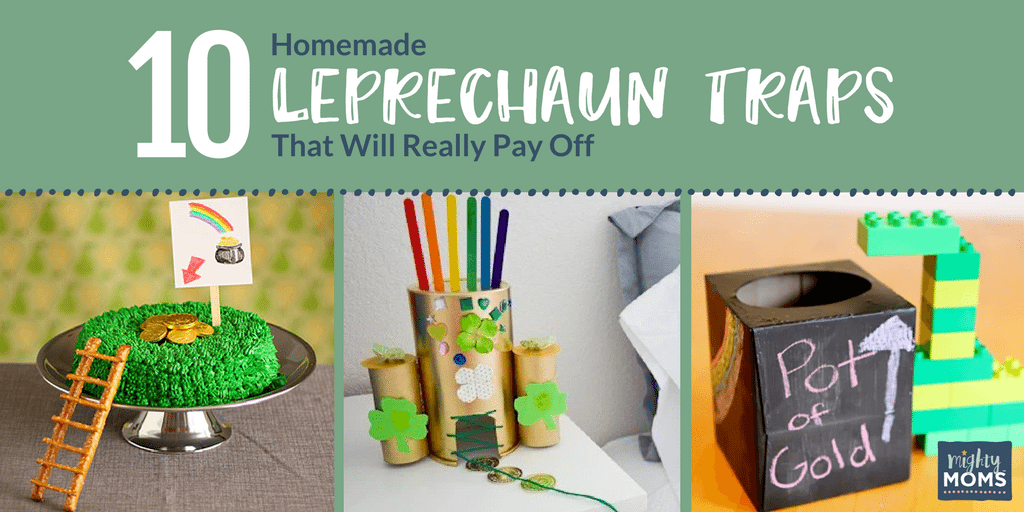 Childhood is all about whimsy and magic, right?

Well, you can’t get much more whimsical than an ornery, pipe-smoking, bearded and irritable mini-man dressed in green bloomers and dancing jigs at the end of a rainbow around a pot of gold.

Close your eyes for a moment (or at least one eye, so you can keep reading) and travel back in time with me…

To me, St. Patrick’s Day sparkled with possibilities. It was a bright exciting holiday in the middle of a dreary, cold, and otherwise boring winter.

Now that I’m a parent, I’m determined to bring all these sparkling memories to my kids.  (Except trashing the living room, because frankly I don’t want to deal with all the fussing to clean it up.  #honesty)

Getting Ready for St. Patrick’s Day

As a bibliophile (which means I’m addicted to books), I use every holiday as an opportunity to read with my kids.  Just like during the Christmas holidays, I keep my St.  Patrick’s books in with my St. Patrick’s Day decorations, only to be brought out once a year – which only adds to my kids excitement on reading them again!

Here are a few excellent books I would highly recommend, to help your child understand why you’re building these traps in the first place!

Once your kids know what you’re trying to do, it’s time to start thinking up your plan!

Here are 10 homemade traps I found inspiring enough to share. Click through to follow the directions to build the same one, or take their ideas and adapt them on your own!

It’s difficult to get easier than this.  Paint an empty Kleenex box with chalk paint, add a few deceptive and misleading messages, and let your 3 year old build a Lego diving board out of greenish blocks.

If it were me, I’d add a few shiny objects at the bottom and hope your local Leprechaun is short-sighted and has to a leeeaaan in to get a better look.  🙂

Obviously the Leprechauns living in the Hamptons aren’t going to be fooled by a painted Kleenex box and a Lego staircase. No sirree. ‘Dem’s fancy folk over there. You need crystal glasses and some fancy schmancy doilies.

Martha doesn’t even bother tempting these gilded Leprechauns with gold. Instead, she uses reverse psychology.  ALL Leprechauns, no matter how clean their top hat is, HATE being told what to do. A simple “Do Not Climb!” sign is all it takes for them to throw caution to the wind.

Can’t you just taste the rainbow?

What’s the trap here? After an all-night feast of cake and frosting, he will be way to portly to climb out. Even better, by morning his tummy will hurt so badly, he’ll spill all his gold-burying secrets in return for a Tums. (So you better have some Tums in the cabinet!)

It’s 6:30 and you are SO ready for the kids to go to bed.  Shoot. You forgot to do this fun family bonding thing and make a trap for St. Patrick’s Day. It only comes once a year, and last year you told the kids the Leprechaun overlooked your house because he was teaching the gnomes under the porch an Irish jig.

Grab an empty laundry basket (hahahahahaha – okay, just dump the clothes on the floor in the corner), a sturdy stick, and a bowl of Lucky Charms. DONE.

It looks so easy sitting there on the counter…those gold coins (he doesn’t need to know they’re really chocolate) are just sitting there.  But what he doesn’t realize (probably because he never baked with Grandma) is that this is a bundt cake.

You know, the cake with a hole in the middle?

And those tempting freebies are sitting on some carefully laid pretzel sticks.  MAWH HA HA HA!  SEE YOU IN THE MORNING, SUCKAH!

I’d like to think this trap was inspired by that brilliant survival movie every child should be forced to watch, Swiss Family Robinson.  Except instead of trapping a hungry tiger to protect your treehouse from bloodthirsty pirates, you’re giving a small man dressed in green with a smoking habit an opportunity to rethink his life choices.

So, it’s like an intervention. You. So magnanimous. You go, girlfriend.

Time to finally use up that scrapbooking paper you purchased at Hobby Lobby two years ago!  Just wrap them around an empty oatmeal container, make a flippy-thingy (technical term), for the top, and start planning out how you’re going to spend all the Spanish Galleons he’s got hidden away.

Personally, I wouldn’t recommend spending them all at once. I’m going to hide at least half of our “earnings” in a remote island off the cost of Nova Scotia, called Oak Island. It will be safe there for sure.

There are two reasons this trap cannot fail.

The fact that we have, right here, physical evidence of this new evolved breed of Leprechaun is simply astounding. Someone call the History Channel, there has got to be a show on this, right after Bigfoot Captured.

It’s amazing how creative kids can be. I mean, I would never think of creating a retirement home trap for aging Leprechauns! Sure, it’s a little twisted to take advantage of those Leprechauns with creaky knees, but on the other hand, I bet those 257 year old Leprechauns have amassed quite the little “nest egg”.

Seriously, forget about trapping a Leprechaun every year. One big score, and you’re set for life. PLUS, if you’re lucky, he will settle right in and completely forget that he’s broke, living in Lincoln Logs, and eating the kid’s leftover soggy Lucky Charms.  Waste not, want not!

This is one gorgeous little Leprechaun castle! Sure, the security system could be a little tighter, but it’s in a great location: right next to your child’s bed. This way, when they hear Mr. Leprechaun and the Misses moving in, she can pull the string and seal them off forever. Or at least until their extended family can come up with the ransom money.

What Happens If You Don’t Catch Him?

I suppose we should talk about what to do if your children FAIL at capturing their prize. Obviously, he’s not going to be happy. He’s going to feel pretty gosh darn naughty.

If you build one of the traps above, don’t forget to leave an “exit” for the kids to discover the next morning.  Perhaps a small length of twine, and a note about how he never travels without one…something to show how he got away.

Lenny’s Revenge: All Tied Up

Since I refuse to trash the living room, I decided a few years ago that our family’s Leprechaun (who I’ve decided is named Lenny) will throw his little “tantrum” in a more civilized manner.  Taking my cue from one of my favorite childhood movies (The Parent Trap), he put all the chairs on the table, and the wrapped everything with string.  It was quite a shocker for my crew in the morning!

Oh, and “Lenny” left a taunting note behind as well, talking about how “sneaky” we tried to be, and how we would NEVER find his pot of gold, followed by a lot of maniacal laughing, right off the page.

Using green cardboard paper and a pair of scissors (or better yet, these stick-and-peel wall decals), leave footprints around the house – up the wall, circling on the ceiling, on the fridge…anywhere little eyes will be astonished to see.

Then don’t forget to lead them to a hidden space where a little pot (or basket) of chocolate golden coins are kept!

This year, I’ve decided that Lenny is going to be a bit more blatant with his tricks.  He’s going to leave a calling card, if you will, in the form of these shamrock stickers.  After all, Lenny the Leprechaun wants credit for his naughtiness!!

Here’s a list of the evil things I just know he’s plotting:

In other words, Karma is a….little man in green knickers.

Why This is Actually Important
(Seriously.)

Listen, mama.  You may not have the energy to help your kids build elaborate Leprechaun traps this year.  Maybe all you can swing is some green milk and a pinch.

There were years that I barely managed to cut out a few feet and hide some coins.  (I totally wish I had these stickers tucked in a closet somewhere, they would have been a HUGE help!)

Eventually, your “little ones” will be big enough to do most of the work themselves! (Yes, that day will arrive!!) In the meantime, though, decide which of these little traditions sound doable and then do them!

Who cares if you’re not Irish!  Leprechauns are like unicorns. They deserve to be enjoyed by ALL children, not just the redheads. 🙂

Take this opportunity to play with your kids.  Be silly with them.  Let these memories seep into their development and tie you all together, strongly bonded as a family.

Brace yourself for a an extremely sappy (but true) cliche: The family that plays together, stays together. Silly little traditions like green milk and Leprechaun traps help tie little family hearts tight together. (Check out this article and this one for more examples of how we slip more fun into our family interactions!)

As St. Patrick’s Day comes to a close, and you’ve tucked them in to dream of green top hats and rainbow slides, pour you and the Hubster a tall glass of Guinness, and toast a holiday well done. 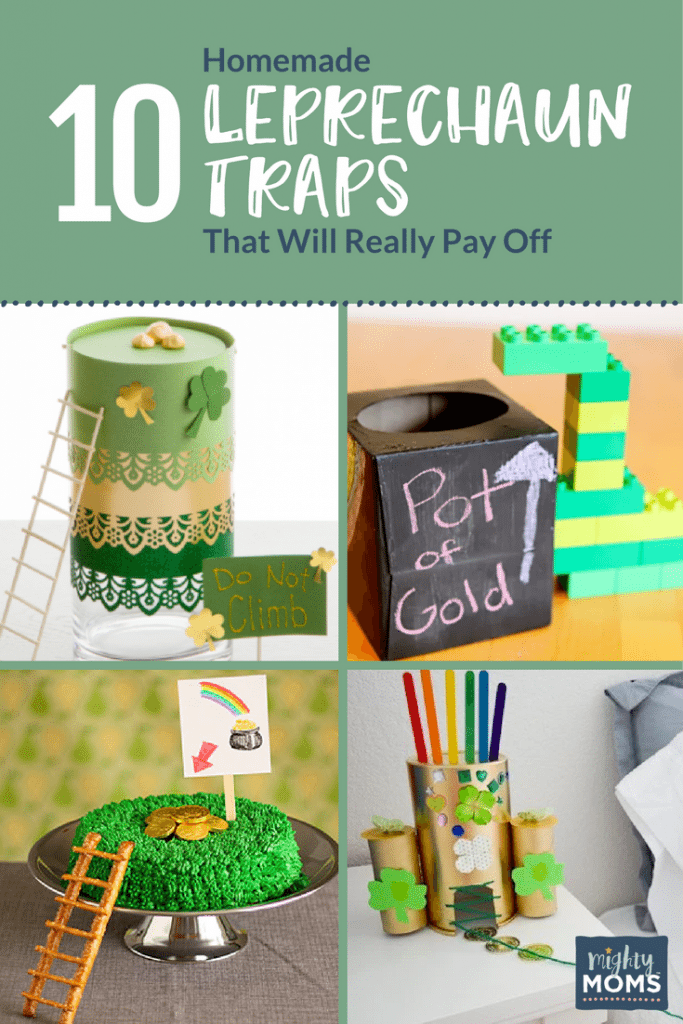