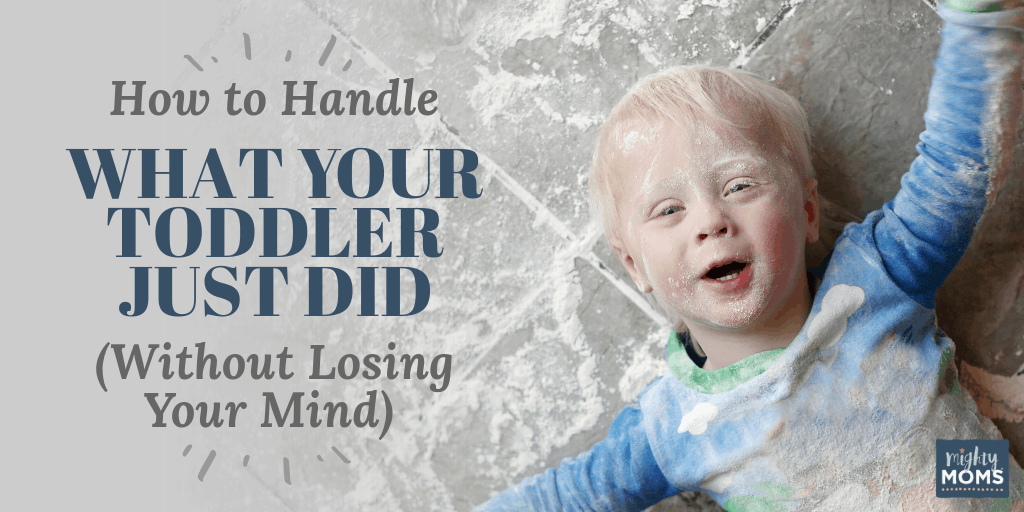 The holidays are over, and now the l-o-n-g months of winter stretch before you. You know what that means:

And cabin fever tends to bring out the ornery side of antsy toddlers, doesn’t it?

By now, your toddler is probably an expert at all these easy toddler activities. So much so that he might no longer wait for your permission before he gets creative all on his own.

And each time, you’re left wondering how exactly to respond. Well, let’s start by taking some deep breaths. Phones can be replaced, hair will grow back, and you’re already a crackerjack at getting out stains.

I’ve got some smart ideas to deal with his destruction without crushing your son’s naturally creative spirit, which begs the question…is he being naughty? Or is he being three?

Is He Being Naughty?
Or Just Childish?

Do you remember those scenes where  Dennis the Menace keeps doing disastrous things to Mr. Wilson? Most of the time, Dennis isn’t trying to be mean. He’s just too curious for his own good—or rather for Mr. Wilson’s.

Childish behavior is innocent (albeit annoying) behavior. It means he didn’t intend to break the rule or disobey.

These aren’t excuses, they are just realistic reasons. A toddler’s judgment is not inborn. We have to train it. Honestly, if you haven’t told him not to do something, he honestly may not know he shouldn’t. But what if it’s more than that?

Naughty behavior has willful intent to do the exact opposite of what you have asked him to do (or not do).

If he is now lying, blaming others, hiding the evidence, or disobeying something you already clearly told him, that’s a clear indicator that he already KNOWS that he has done something he shouldn’t have done.

Naughtiness isn’t acting in innocence, but in willful disobedience, and needs gentle correction through discipline.

Discipline isn’t about a parental ego trip (“Because I said so and I’m in charge!”), it is about protection.

When he runs into the street after that shiny red ball, you won’t have time to “persuade” him to stop. You need him to stop immediately when you shout STOP! because he’s learned that life is a lot safer when he submits to your authority. He doesn’t know the dangers of this world, but you do.

So teaching him to obey isn’t about parental arrogance, it’s about teaching him to listen to your words and instruction, so you can keep him safe and teach him how to behave properly in the world.

As a parent, our “authority” will change as our children grow, but at this very young age it is very important, for the health and safety of our young brood, that they learn to submit in our wisdom and follow our lead.

Handle What Your Toddler Just Did:
Be Proactive

You know those times when you’re holding the latest piece of destruction, wishing you’d had your 20/20-hindsight before it happened?

Well, don’t delay! Think about potential toddler disasters in your home and then put plans in place to keep your things safe. Here are a few ideas to get your started:

Taking a few minutes to show him what he can use and what he can’t could save you many headaches later. Then, if he gets into things that you’ve taught him not to, you can know it’s time for some discipline.

Handle What Your Toddler Just Did:
After He Does It

You’ve been proactive. You’ve redirected and addressed his childishness. But what if he wasn’t just being childish?

So, how do you handle naughty behavior?

Counting to Ten: It’s Really for You

When you find your child has destroyed something, don’t react immediately. Count to ten to let yourself calm down.

The Trick to an Effective Time Out

Sometimes your little tornado needs to be removed from the fun and games. It helps him think about what happened, the response it earned, and what should have happened instead.

The Art of Removing Privileges

For some personalities, a more effective discipline may be not having the thing they want! They will happily sit in Time Out all afternoon, but if you take away something they want…well, you may want to freshen up your tantrum skills.

Just because it’s hard, though, doesn’t mean you shouldn’t use it! The goal is to help your child understand limits, not to have an easy few years (and then suffer greatly through the teenage years).

For example, if scissors are the tempting item, here’s how to remove that privilege effectively for a few days.

Having to go without the scissors for 2-3 days will be a great reminder for her the next time she is tempted to misuse them and ignore your previous instructions!

The Most Important Piece: Speak to His Heart

No matter what discipline you choose, it is vitally important that you take the time to process and connect with your child afterwards.

Why not cuddle on the couch and read together! No, David, a story of a little boy whose mother still loved him despite the fact that he kept getting into mischief, is a great story to choose!

Handle What Your Toddler Just Did:
Fix the Actual Problem

You’ve taken time to wisely handle the discipline piece, but the fact still remains that your phone went through a vigorous game of battleship, your daughter’s hair looks like it met a hacksaw, and you’re ready to throw away the whiteboard, not to mention your banana-covered clothes.

Hang tight. Here are some tried-and-true hacks to reverse the damage—or, in the case of your daughter’s new style, at least make it look cute again until it grows out.

How to Save Your Cell Phone

Smart phone in water? It’s likely your battery can’t be removed. But, if you try some of the helpful tips in this article, your phone might still have a chance!

How to Save a Bad Haircut

Spruce up those sad bangs with adorable claw clips, capable of holding the shortest hair and hiding the crookedest cut. Choose flowers, butterflies, or even rhinestones.

Stretchy headbands can cover a multitude of sins, and in the WORST of cases, why not a sweet baseball cap when you have to go out and about?

How to Save Your Surfaces

Good News: Permanent marker doesn’t actually have to be permanent.

But what if he used his permanent marker Picasso skills on your linoleum?

Grab some super fine steel wool and gently buff off the marker. It takes off the color but barely touches the finish of the floor.

You won’t even know the marker was there.

How to Save Your Fabrics

I don’t suppose Gianni Versace ever dyed his fabrics with food, but your son could teach him a thing or two. And nothing stains like bananas.

Don’t worry. If it can be washed, you’ll have it out by tomorrow morning.

Good as new! And, yes, it works on more than just food stains: blood, grass, motor oil. Even if you’ve already tried to wash them with regular detergent before.

Only have a few clothes to de-stain? Cut the recipe in half and soak it in a clean mop bucket.

All Cleaned Up and
Ready to Grow

Uh-oh moments are par for the course with a toddler. And while they might require you to take some deep breaths, they don’t have to ruin your day—or his.

Instead, you can guide him to enjoy his curiosity safely and, with just a few inexpensive everyday items, you can make the damage disappear.

Not bad for a day’s work! 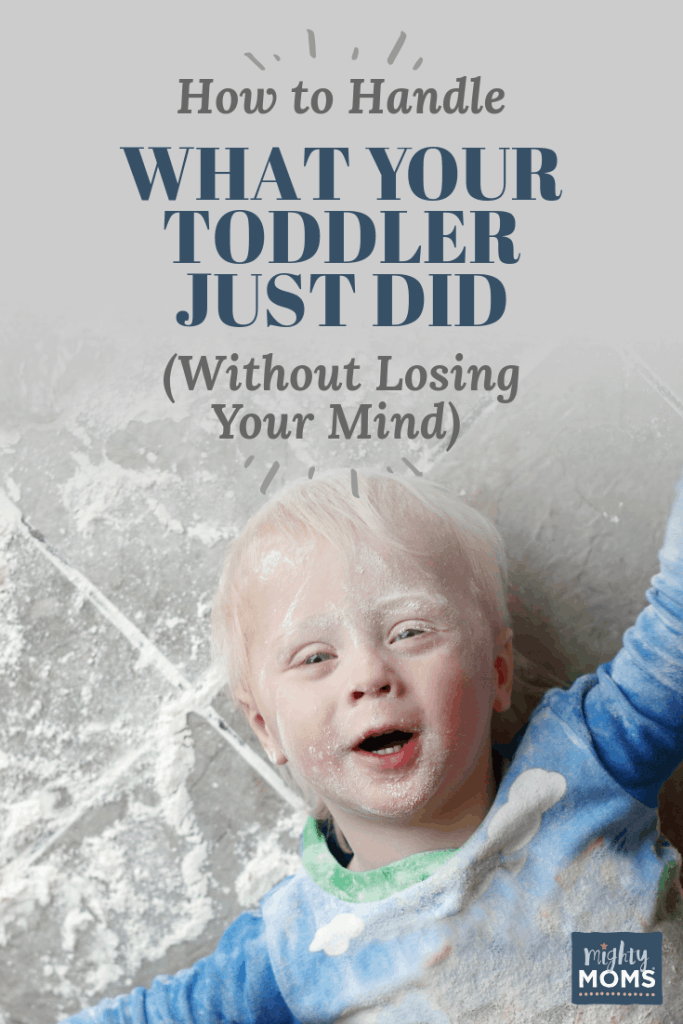